In this series, we examine how modern quilters have reinterpreted traditional quilt blocks for a modern aesthetic.

The drunkard’s path block consists of a a quarter circle set in a corner of the block with a contrasting fabric comprising the rest of the block. How this half circle is placed in the quilt and the play of contrast within the block is what makes this block so versatile.  There are many traditional arrangements with names such as, “Double Wrench”, “Wanderer’s Path in the Wilderness”, “Solomon’s Puzzle”, and “Wonder of the World” (3).

This is the configuration of the drunkard’s path block.  Changing the size, value, contrast, and placement of the fabrics within the block is what allows the designer to create so many different looks.

This is an example of the traditional arrangement called “Solomon’s Puzzle.” 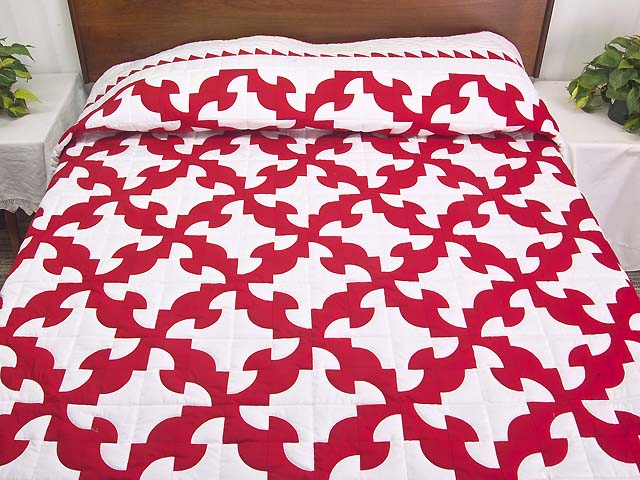 This is a traditional Drunkard’s Path in crimson and white.

The history of the drunkard’s path block is both steeped in romanticism and history.  Some theorized that the zig zag pattern of the blocks contained secret codes designed to aid slaves escaping through the Underground Railroad.  However, some have found this notion unreasonable as slaves would have traveled at night and would have been unable to see quilting patterns in the pitch black of  night (1).  Others assert that the history of the drunkards path lies mainly in the Women’s Temperance Movement.  Women sewed these quilts to promote the abolition of alcohol.  The drunkard’s path was meant to symbolize a drunk’s staggering walk.  Often, these quilts were sewn in blue and white, white representing purity and blue representing water, the purest of all beverages (2).  This notion may be fanciful as well, “As a writer* in an 1898 issue of The Modern Priscilla stated, ‘Color harmony is the key-note to success [in patchwork], and simplicity the next most important consideration. . . .  All things considered, [a] pretty indigo blue and white print and white muslin combine beauty with the coveted old-time air more effectively than any style of cotton patchwork.'”  *Katherine B. Johnson, “New Ideas in Patchwork,” The Modern Priscilla (May 1898):7.” (3).

Today’s modern interpretation of the drunkard’s path hardly resembles quilts of the past.  Modern Quilters make clever use of negative space and very nontraditional block layout.  Often, the quilting (or stitching) on these modern quilts helps convey a story as much as the piecing.  Although these quilts lack historical romanticism, they do not lack the rich stories of their makers.

This is the Ripple Quilt by Daniel Rouse. This is a great example of expansive use of negative space and very nontraditional block placement.

This quilt also comes from Daniel Rouse.  The negative space in this quilt is made up of non-neutral tones.  The placement of the drunkard’s path blocks are very nontraditional.  He also employs use of square and rectangular blocks instead of using drunkard’s path for the whole quilt.

This drunkard’s path block from Jeanette Bruce  contains no negative space and uses fabric placement to create a scalloped pattern.

We meet at 6:30 on the first Tuesday of the month at the Domingo Baca Multigenerational Center at 7521 Carmel Ave NE. If you have any questions, please contact Hip Stitch at (505) 821-2739 or email us at: albuquerquemqg@gmail.com.

Quilts of a Feather